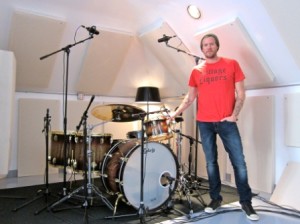 Scott expressed his appreciation, “Drumming for Train keeps me very busy, so I wanted a place where I could practice and write while I was home. I have this great space in the back of my house but it’s very large and very live with a long reverb time. I needed a way to tame some of that liveliness so that the demos I made at home would sound clearer, tighter, and punchier.

I contacted local studio owner Brad Smalling of Evergroove Studio and asked him if he could help. Brad suggested GIK Acoustics for panels and partitions and he went to work putting together a package. We then contacted Bryan Pape [lead designer at GIK] and sent him some photos of the space. Bryan was great in helping us refine and finalize our acoustic treatment plan. He analyzed the photos and dimensions and then made some small but incredibly effective suggestions to our acoustical plan and we placed our order.

About two weeks later the panels showed up and Brad went to work installing them. Once they were installed we did a test recording. The drums sounded great! Of course there was still some liveliness from the room but we’re getting a much tighter and more direct sound on the microphones and I love it.

I love my new GIK acoustic treatments. They have made my home studio a joy to work in.”

Train’s sixth studio album California 37 was released in April 2012 and the band will be on tour this summer.  For more information, visit their official website.